The Recovery of Texts and the Dzongpa Literature Project

Until the 1950s, Gongkar Choede housed an exhaustive collection of texts, most of which were kept in the monastery's library on the uppermost storey in northern part of the main temple building. [1] According to the lifestory of Dorjedenpa, this room rested on four wooden pillars (phyag dpe khang ka bzhi ma) and contained sets of the Tibetan canonical collections and writings of masters central to the tradition. Gyaton Jangchub Wanggyal (1470–ca. 1540s), who compiled Dorjedenpa's biography in 1540, briefly summarizes the content of the collection at the time of writing. [2] In the tenth chapter, describing at length the temple building and its interior, Gyaton reports the existence of the one manuscript volume of the Extensive Prajñāpāramitā (Yum rgyas pa) in Indian script, as well as two sets of the Sakya Founder's Collected Writings (Sa skya bka' 'bum). Gyaton furthermore lists the collected writings (bka' 'bum) of his master Dorjedenpa, and the literary oeuvre of Lama Dampa, Thegchen Choeje and Dragtogpa Sonam Sangpo (fl. early 15th cent.), the latter three being lineal gurus in the Gongkar Lamdre as it was successively transmitted to Dorjedenpa. In addition to that literary collection, Gyaton also lists the collected writings of Dorjedenpa's ordination teacher, Jampalingpa Sonam Namgyal (1400–1475) and of Buton Rinchen Drub (1290–1364). He concludes his description of the library holdings by stating that the collection comprises the most important scriptures from the domain of tantra and sutra.

Originally access to this library was restricted to esteemed teachers, authorized monastics and respected visitors. One past visitor was Kathog Situ Choekyi Gyatso (1880–1925), who visited the monastery in 1918. Obviously impressed by the amount and diversity of the material, that traveller from Eastern Tibet notes in his travel diary that the library held about three-hundred volumes of miscellaneous scriptures (dpe cha sna tshogs), including also old Nyingma texts. [3] Another visitor who witnessed the impressive collection was the Italian Tibetologist Giuseppe Tucci, who in his travel itinerary, excitedly described the discovery of texts that the previous Dorjedenpa tulku showed him during his sojourn there in 1949. [4]

Apart from the library holdings in the main temple, it is highly likely that collections of books were also housed in each of the monastic colleges (grwa tshang), as well as in the residence quarter (bla brang) of Dorjedenpa and his successive incarnations. Moreover, the monks must have kept texts for ritual practice as well as for personal study or practice. Shared among the ritualists or those who pursued textual studies at the monastery, those books were apparently stored in the monk's housing units (shag tshang; gzim shag) or in the individual colleges to which they belonged. Prior to the 1950s, Gongkar Choede must have accommodated one of the foremost text collections in Lhokha, replete with very precious handwritten books and early prints from the region.

However, except a few individual books, the entire body of monastic books disappeared with the shutdown of the monastery. Added to this came that the Gongkar head lama and main lineage holder, the fifth Dorjedenpa tulku Jampel Lungtok Choekyi Gyaltsen (b. 1928), died in the Lhasa uprising of 1959, and that the entirety of text authorizations which he then held came to an end with his unexpected death.

Only when monastic life was reintroduced at the monastery in the 1980s, did a few books come to light again. After decades of neglect and suppression, the new community of monks began to restore their former liturgy and protector rituals from the few texts remaining or through the memory of elder monks. The restored prayer and ritual texts put together in those days, together with Dorjedenpa's lifestory and a handful of his writings, formed the sole curriculum in the early years of revival. Copies of the original texts were produced by hand in those days and later, in the 1990s, the important books circulated in form of xerox copies among monks inside and outside of Tibet. It was on the basis of those copies that a basic monastic programme could be introduced at Gongkar Choede's exile branch in Dehradun (in north India), where the incumbent Dorjedenpa tulku, and a group of exiled monks had settled in the late 1990s.

In the past two decades, Gongkar Choede published selected titles from the reassembled corpus of remaining or reacquired works. In many cases, the original texts for publication came from elderly or retired monks, or they were acquired from external library collections. Evidently, some books that had survived outside the monastic walls in village households were donated (or returned) to the monastery.

The Search and Cataloguing of Texts

Not only for the Gongkar Choede is the recovery of lost texts a primary concern for the full revitalization of monastic life. Like in other traditions, the books constitute the foundation and the medium for the monk's complete range of activities in tradition of Dorjedenpa. Monastic customs, its curricula, ritual practices and regulations are maintained, adapted and passed on along with the underlying texts that convey and explain them. In this regard the recovery of texts is the first step for overcoming the severe disruption in the tradition which befell thousands of monasteries in Tibet.

Despite for its monastic revival since the 1980s, Gongkar Choede received only little attention as a distinct tradition among the contemporary Sakyapa outside of Tibet. This is certainly due their late arrival in the exile community and the fact that most of their literature remained lost and unknown until very recently. Their distinctive tantric exegesis and intellectual contribution to Tibetan scholasticism remains unstudied up to the present day. Until the mid-2000s, Gongkar monks were eagerly studying their history from the few texts available and the handful of references in standard Tibetan histories, assuming that the entire literature pertaining to their tradition was lost forever.

The incredible number of texts that suddenly became visible through Peltseg's preservation and cataloguing work at Drepung monastery in the early 2000s, made the Gongkar community feel a great hope that they might eventually locate its founder's works. In fact, it was not too much of a surprise that several writings of Dorjedenpa and other contemporary Dzongpa masters could be traced in the Nechu (gNas bcu) temple library at Drepung, which once constituted the private collection of the Fifth Dalai Lama (1617–1682), and is said to include material from Lhokha and various other sites all over Central Tibet. Moreover, the Fifth Dalai Lama himself had studied widely under two teachers with close connections to Gongkar Choede. It soon became necessary for the monks to systematically keep track of the many titles of previously unknown or lost Dzongpa works that were listed in the Drepung catalogue published in 2004.

In 2006, Ven. Losal Dondrub completed a first title list recording 740 works. From the two volumes of the Drepung catalogue he extracted those titles relating to the Early Dzongpa and Gongkar tradition. In addition, he researched a wide range of Sakya historical material for title references of Dzongpa works cited in there, including several Sakya biographies, genealogies, as well as indigenous title lists and records of teachings received of prominent lineage holders of different traditions. Losal Dondrub's extensive list of titles, which often cited the individual work in a shortened or descriptive title, provided a first overview of the unknown literary corpus pertaining to the two traditions, and allowed for identifying the most prolific authors and their main topics in writing. In practical terms, his handlist helped to clarify authorship and to ascertain titles in other collections that gradually became available.

In 2013, Ven. Jampel Shedrub compiled a list of 217 titles comprising material that had recently been recovered from different external collections. His list records many hitherto lost or unknown works by Dorjedenpa and major Dzongpa representatives from Tsang, including masters such as Dzongpa Kunga Gyaltsen (1382–1426), Ananda Mati (1372–1454), Jampa Choekyi Rinchen (ca. 1420–1493) and Mus srad pa rDo rje rgyal mtshan (1424–1498). Jampel Shedrub extended his list to include also the writings of the Sakya Khon hierarchs Lama Dampa and Thegchen Choeje, that survived in different manuscript sets scattered over Central Tibet. His list was compiled to monitor the ongoing search for texts and to facilitate the editing and publication work by the “Preservation centre for ancient Dzongpa texts” (rDzong pa'i dpe rnying 'tshol bsdu khang) that was founded two years earlier, in 2011. Since then, most works on his list were published under the Saṃbhoṭa Ongyu Petsok Series, for which Jampel Shedrub, among others, supervised the editorial work. In 2012, the first 7 volumes in this series were published, followed by the release of Lama Dampa's complete writings (26 vols.) in 2016, and the set of Collected Writings of the Dzongpa Tradition (30 vols.) published in 2017.

The Dzongpa Literature Project (since 2011)

In 2016, the survey of the Dzongpa's textual legacy entered a new stage. With funding approved by the Indian Ministry of Culture (Scheme for Developing Buddhist/Tibetan Culture and Arts) a web tool for monitoring the ongoing cataloguing was developed in collaboration between Gongkar Choede (Dehradun) and the Institute for the Cultural and Intellectual History of Asia (IKGA) of the Austrian Academy of Sciences (Vienna). The digital cataloguing started in around 2011 with the recording of published works and the description of miscellaneous manuscripts that I had inspected during an earlier visit at Gongkar Choede. Since then, titles from the handlists of Losal Dondrub and Jampel Shedrub were revised and complemented with section outlines and colophon transcriptions, if those works were accessible.

The shift from the handlists to collaborative online editing, with each title reassessed and supplemented by specific genre and topic classifications, significantly improved the quality and appearance of the entries. Now, users can quickly inquire about the provenance, physical appearance and condition of a work by searching or browsing through the collection of titles. The availability of the work is indicated by different icon colours (see below).

To address a wider audience, the DLP catalogue also features a bilingual English-Tibetan language interface and offers the display of excerpts in either Tibetan or Wylie transcription. The responsive interface was specially designed for mobile devices that are typically used among Tibetan monastics across Asia.

Currently, the catalogue contains about 800 titles. New titles of recently published or rediscovered works, as well as unrecorded Dzongpa titles cited in the primary literature, are added to the catalogue whenever spotted. The next step towards a visual presentation of the material will be the integration of data analysis and visualization tools that could capture genre distribution and intertextual relationships within the collection. 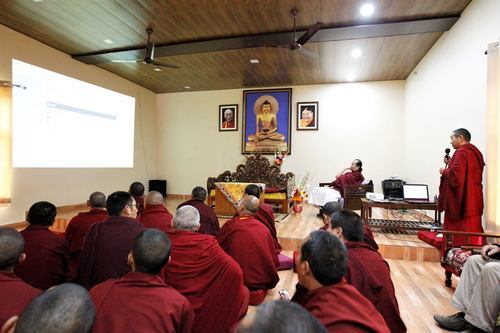 [1] The original location of the library is not to be confused with the current position of chapel of the Sixteen Elders (gNas bcu lha khang) on the southern side of the same floor, that, in earlier times, was the Kanjur chapel (bKa' 'gyur lha khang); cf. gong dkar chos sde gnas yig [2013] (p. 49).

The Dzongpa Literature Project (DLP) is based at Gongkar Choede Monastery in Dehradun, India. The project has been pursued in cooperation with the Institute for the Cultural and Intellectual History of Asia (IKGA) of the Austrian Academy of Sciences in Vienna (Austria). The development of the DLP web tool was through generous funds provided by the Ministry of Culture, Government of India under the Scheme for Developing Buddhist/Tibetan Culture and Arts (2015-2016) and the Austrian Science Fund (FWF): F42 Visions of Community.